Always The Lowest Price
We Shop Around For You

Geneva airport is located on the border of France and Switzerland – the airport itself has two sides (“sectors”) – One Swiss and One French. If you are flying in from a French Airport, you come into the French side. From everywhere else you arrive in the Swiss side. You can walk from one side to the other (there no Immigration check between them, but customs officers are present). 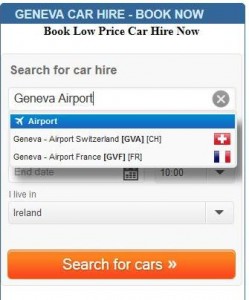 A general tip: it’s usually cheaper to hire on the French side, and there aren’t any major restrictions and driving in other countries with your French Car.

However if you do rent a car a French Registered Car at Geneva Airport, and want to drive any distance on Swiss motorways, you will need to buy a “vignette” or toll sticker. These cost CHF 40.00 (valid for the current calendar year) and are not typically not available from the hire companies at the airport. You can buy them at the Border post at Ferney Voltaire, just as you drive into Switzerland, or at any other Swiss border post.

Cars hired at either the French or Swiss sides of Geneva airport can come with winter driving equipment such as winter tyres, snow chains and ski racks, as well as GPS – for more information on winter car hire click here.

One way rental tip: Return your rented car in the same country where you rented it. So If you wish to hire a car which you will drop off later at another location in France it is much cheaper to do so on the French side even though you may arrive on the Swiss side. Similarly if you intend to drop off your rental car in another location in Switzerland (other than Geneva Airport), it’s always cheaper to rent from the Swiss Side.

Change The Language of Your Cheap Car Hire Booking Engine